I've had a bit of a Homeplug-fest recently, with several companies releasing new 500Mbps products at the same time. The latest is Devolo's 500 AVMini Starter Kit, which contains two miniature siblings of the 500 AVPlus models I reviewed recently. 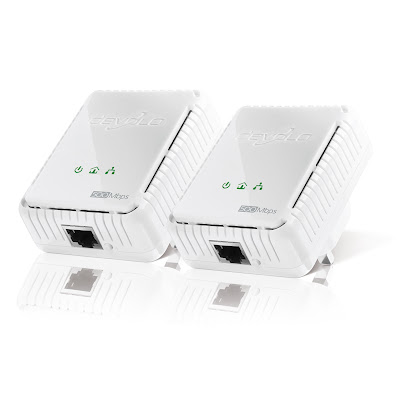 Miniature adapters seem to be the latest craze, and it's understandable if you've ever tried to plug a full-size adapter into a UK double wall socket - in many cases, they just won't fit alongside a standard mains plug. The odd thing about the 500 AVMinis is that they are 65mm wide, which is exactly the same as the huge 500 AVPlus adapter. Every other dimension is smaller, however - the thickness (excluding the plug) is 30mm versus 40mm, and the length 80mm rather than 130mm. As with the 500 AVPlus, this means that they are a very tight fit in a double socket.

In the box you get a pair of decent quality network cables (not snagless ones, though), plus a quick-install guide and a CD with the excellent dLan Cockpit utility software.

They share the same styling as most of Devolo's adapters, featuring a well-ventilated white casing with a Gigabit Ethernet port at the base and a reset/encryption button next to it. The three status LEDs on the top face are large and easy to read, showing red, orange or green to indicate the Homeplug connection speed. They will work with 200Mbps Homeplug AV adapters, but not with Homeplug 1.0 devices (they will coexist happily, but won't be able to talk to each other).

The dLan Cockpit software (see picture below) allows users to add adapters using the security code printed on the adapter, view the link speeds between Devolo adapters (other brands won't show up), rest or change the passwords and give them descriptive names. There's also a basic troubleshooting guide.

As far as I am aware, all 500Mbps Homeplug devices, including the 500 AVMini and AVPlus, are based on the Qualcomm Atheros AR7400 series of chips. Although complying with the Homeplug AV standard for 200Mbps connectivity, they use a wider frequency range of 2-68MHz (instead of 2-28MHz) to achieve higher throughput when they detect other AR7400-based devices. They also incorporate a Gigabit Ethernet port instead of the mandated 10/100Mbps port in the standard. This will all change when products based on the long-awaited Homeplug AV2 standard appear, with support for gigabit link speeds (note that any products you see at the moment described as 'Homeplug AV2' are certainly not, as some retailers incorrectly use this tag to describe 500Mbps Atheros-based products).

I have standardised on Totusoft's excellent LAN Speed Test and LST Server for testing powerline devices. It's simple, quick and reliable, and as I'm not particularly interested in graphing throughput for these devices it works fine (I still use Passmark for NAS and Wifi testing, however, due to its graphing features).

For the test setup, I've found by trial and error that the most reliable way to get maximum repeatable performance is to plug two adapters into each end of an extension socket, which is then connected to a dedicated mains socket. This arrangement removes most of the effects of my rubbish domestic wiring, and usually allows me to get the full advertised link speeds. I also do informal tests using random sockets around the house, but the results vary so much that they are not really useful to anyone who doesn't live in my house. With the AVMinis, I found that on most occasions I could easily get 150-200Mbps link speeds even in the worst cases (as indicated in the dLan Cockpit software), giving performance up to about half of the maximum.


As I tested the 500 AVMinis, I realised that as I had a decent collection of powerline adapters (Devolo, Netgear and Solwise) lying around, I might as well test them all together to give a performance matrix for future reference. The results are shown in the table below. All adapters were upgraded to the latest firmware versions I could find. The figures shown are the average of the read and write performance results, averaged over three test runs using a 1MB packet size (the default) with a 100-packet test duration. This extended duration helps even out the initial ramp-up in throughput often seen with these adapters.


As you can see, the 500 AVMinis did very well, tieing with the 500AVPlus for top performance between identical adapters. Perhaps unsurprisingly, they also worked well with the Netgear AV5101 Atheros-based adapters, although a fraction slower than when working with another 500AVMini. These speeds make them much more attractive than the 200Mbps models. Unfortunately I only had a single Devolo 200 AVMini, so I couldn't get a result for that cell.

The Solwise adapters are an oddity, being based on the 1Gbps Gigle MediaXtream chipset. This claims to work with Homeplug AV, and it does, but not particularly well. When the Solwise adapters appeared, their performance was impressive, but they now appear to have been overtaken by Homeplug.

The Devolo 500 AVMini Starter Kit is the joint fastest Homeplug adapter I've tested, tying with the Devolo 500 AVPlus to give real throughput of up to 135Mbps in ideal conditions. The adapters are small, but no narrower than the 500 AVPlus model, making them still quite a tight fit if you want to use them in a dual wall socket. The software is excellent (although it's not needed for operation), and the kit is a similar price to the competing Netgear XAVB101 kit (a full review of this is coming shortly), but if you want maximum performance they are highly recommended.