How to fix the WHS 'cqvsvc.exe' error and Media Center's Console View

Today, I'm a very happy man. Ever since I upgraded my WHS system to Power Pack 3 a couple of years ago, there has been an incredibly annoying glitch related to the WHS Media Center Connector service, and after months of searching I finally stumbled on an answer. Hooray!

The main problem has been that, apart from a brief period when I first installed the Media Center Connector, the Console View tab refuses to work, giving an error message. Also, on the WHS system, looking at the Application section of Event Viewer revealed that a service called Cqvsvc.exe (which is the Console Quick View Service) was generating an error every minute of every day. For nearly two years.

It wasn't causing any system problems or instability as far as I'm aware (the TV Archive service was working perfectly), and my WHS system has been as steady as a rock ever since I built it in 2009.

However, it was incredibly annoying to see these messages, and not to be able to view the Console status in my Media Center PC, which is my secondary living room PC. (I also run Media Center on my main work PC, mainly for recording odd programs via RF from my Virgin Media cable TV box).

I've regularly trawled around various sites and forums looking for an answer, but it came to a head today when I tried to install the WHS Health add-in and it failed with an error relating to the non-existence of health.xml in the WHS C:\inetpub\intranet\health\ directory. Eh?

Turns out this file is where Cqsvc.exe gets its health info from, and so if it doesn't exist, an error is generated.  The specific error I was getting in the Event Viewer was Error 9000, "System.Management.ManagementException", with a further description of "Invalid class"


(On a separate note, it seems from my investigations that there are many different error messages caused by Cqvsvc.exe, and the fix here may well only apply to this particular error, so I can't guarantee results).


The first thing to try if you're having this error is to try and look at the health.xml file. It's located at http://[servername]:55000/health/health.xml  (substitute your WHS server's name for [servername]) - put this into a browser and you should see the file appear. It looks like this:

If instead you get an error message, the chances are that the file hasn't been created, as in my case, due to the Cqvsvc.exe problem.


I found the fix on this thread on the MS Home Server forums (scroll down to a reply from Donald Lu, who appears to be a Microsoft employee - thanks, Donald!). To run it, open Remote Desktop connection to WHS machine, then open a command prompt (press the Windows key and R, then type 'cmd' in the Open box and press Enter).

then press Enter. And that's it!

There will be no messages in the command prompt, so just close it. You don't even need to reboot the machine. Now try opening the health.xml file again as described above - it should now be there. And the Media Center Console view should be working, just like this: 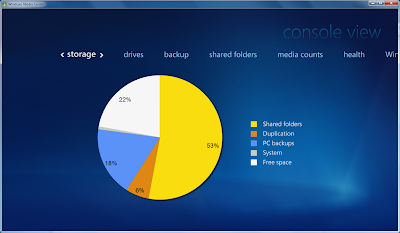 I hope this helps anyone who, like me, has been driven to distraction by this problem.

Email ThisBlogThis!Share to TwitterShare to FacebookShare to Pinterest
Labels: Feature, How to, WHS