Another bargain from TP-Link, for those who don't need 3-stream 11n capabilities

Router prices are dropping to crazy levels, typified by the measly £60 you need to get hold of the TP-Link TL-WDR3600. This is a dual-band, dual-stream (N600) cable model (it doesn’t have an ADSL modem), and although it offers little in the way of innovation it has plenty of decent features and adequate performance.

The design is exactly the same as the pug-ugly TL-WDR4300  (click for my review), with a large, shiny black plastic case that - to my mind at least - just makes it look cheap and nasty. This feeling is reinforced by the 10 (yes, 10) blue status LEDs on the front. Blue LEDs have been so overdone in recent years that now they just look old-fashioned. In this case, it’s not helped by the fact that the LEDs are quite large and most of them blink constantly, which is incredibly distracting if the router’s in view. I do like status LEDs, but they need to be both discrete and clear - in the WDR3600 it’s hard to tell which is which from a distance, and they don’t change colour when there’s a problem, just blink differently.

It has two standard detachable dual-band external antennas. These look a bit ungainly, but many users still prefer them to the more fashionable internal micro-antennas. At the back are the standard four Gigabit Ethernet ports, plus a dedicated WAN port (also Gigabit Ethernet). Two USB2 ports (which differentiate this model from the single-ported WDR3500), a power switch and reset button complete the external hardware features.

Styling aside, there’s plenty to like about the WDR3600. The setup wizard on the CD works well, and allows you to clone the MAC address if needed. There’s also a wizard in the web management menu, which can be opened using the http://tplinklogin.net shortcut (the default username and password are both ‘admin’).
The settings menu is the standard TP-Link 3-column text-based interface (there’s an emulator at http://www.tp-link.com/resources/simulator/TL-WDR3600/Index.htm if you want to take a look). There’s a growing trend to graphical interfaces, but I still prefer the speed and simplicity of text, as long as stuff is easy to find. In this case, it is, with a category menu down the left side, settings in the middle and contextual help at the right.

The USB ports support printers and storage, but not 3G dongles. User accounts can be created for volume-level access via Windows Explorer, but shared folders can only be created for FTP access.
There’s also a DLNA media server, although this can only share up to six separate folders on each storage device.

One unusual feature, also seen in the WDR4300, is the hardware NAT acceleration - this can be enabled or disabled in the NAT section of the settings. Personally, I think it’s a bit of a waste of time - all it does is improve WAN to LAN throughput to a quoted 800Mbps. This feature is really intended for enterprise use when connected to a Gigabit WAN, so that internet traffic can be sent at wire speed. For ordinary broadband, it’s not really necessary. Also, some readers of this blog have complained about the hardware NAT affecting VoIP in the WDR4300, although during a couple of weeks’ testing the WDR3600 I saw no problems (my SIP provider is Sipgate).

The WDR3600 does have a few access control features, including parental controls and bandwidth control. They’re not the easiest for novices to set up, though, as they do need an understanding of protocols and ports. The parental controls can be used for white-/blacklisting IP addresses, domains or protocols and scheduling access times for any MAC address. Bandwidth control is fairly basic, allowing rules-based limiting of inbound or outbound traffic. There are no automated QoS settings. 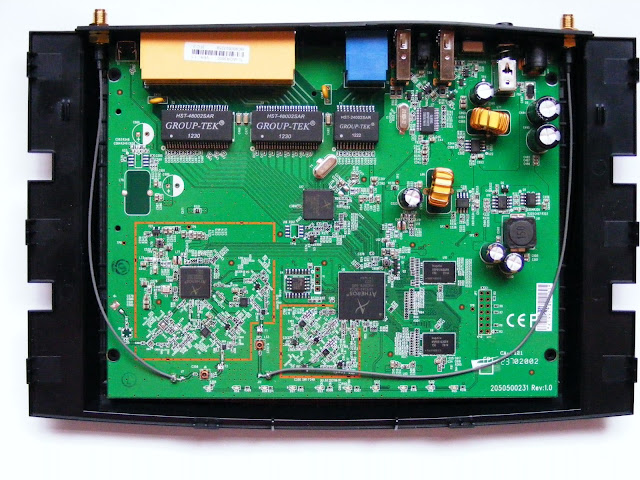 The WDR3600 is configured by default for auto channel width settings on both bands. As usual, I tested using the defaults. My test environment (my home) is surrounded by several neighbouring 2.4GHz networks (but no 5GHz networks yet), making it a good place to see real world performance.

As usual, I used the Advanced Networking Tests section in Passmark Performance Test 8 (I do also run Totusoft’s LAN Speed Test for a quick sanity check). The standard client adapter I use is a 3-stream (450Mbps) Intel Ultimate N Wifi Link 5300AGN adapter retrofitted to an Acer Aspire One netbook.
At close range (1m) on the 2.4GHZ band the WDR3600 did very well compared to some routers I’ve seen recently, managing 50Mbps average throughput. It didn’t do so well at 25m, though, with a very unreliable connection averaging around 5Mbps.

At 5GHz the close range performance was actually slightly less than the 2.4GHz results at 48Mbps, which is quite unusual. However, at 25m it was much better at 18Mbps - this is still a fairly average result, however.

Although its performance results are not particularly noteworthy, considering the price they’re perfectly acceptable. Oddly, the numbers are slightly better than those I measured in the more expensive TL-WDR4300.

It does have an almost identical set of features to the WDR4300, though, and given that the WDR3600 is around £15-£20 cheaper, I’d definitely recommend it, especially for those who don’t have any 3-stream 11n clients.