It was with great sadness I learned this week of the death of a colleague from the days of PC Magazine UK, Peter 'PJ' Jackson. According to his sister, he passed away on 19 August, 2012. He had some major health problems that he had been fighting for some time. He was just 57.

I met PJ in 1992 on PC Magazine, and worked with him until he was made redundant in about 2001 after we were taken over by VNU. Peter was one of the two Editorial Fellows on the magazine (the other was the late Guy Kewney) and I remember sitting next to him in the office for a year or so when we moved to VNU. I remember him introducing me to the writings of Stephen Jay Gould, something that rekindled my love of books that had been dormant for many years.

He constantly inspired me with both the depth and breadth of his knowledge, and his uncanny ability to quickly grasp a subject and write about it as though he'd known about it all his life - very handy for last-minute product reviews and features. His copy was always a joy to read.

I edited his column for a while, but his writing rarely needed an editor - which was fortunate as he had a complete disdain for deadlines and was invariably oh-my-god-we're-going-to-miss-the-printers late with his copy. He had a true gift for writing with style and clarity for any level of audience.

I don't really know that much about his career, but I do know he edited PCW for a while in the 80s, and I also seem to remember that he launched MicroScope, although I may be wrong. I only have a couple of photos of him - the one at the top  is from a 1997 copy of PC Magazine, the one below from the PCW 'wake' party in 2009.

PJ was a great journalist and an utterly lovely bloke - he will be sorely missed. His sister informs me that a celebration of his life is planned for 29 September, 2012 - if anyone would like to be put in touch with her to find out more details, email me via the link in my profile. 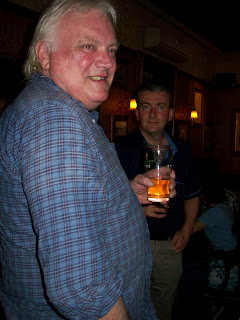