A couple of years ago, I posted about some of the seismic lines I'd found (and created!) on Google Maps. the other day I was reminded of this when browsing the map of Libya, where I worked as Party Chief on a seismic crew from 1982 to 1984. In most places I worked, there had been lots of previous seismic surveys, so the chances of finding one the lines that I worked on are remote. My original post showed some lines in Yemen and Libya that were unique, so fairly easy to spot.

Anyway, looking at the tidal salt-pan (sabkha) area around Marsa Brega (which of course has been in the news a lot over the past few months), I spotted some dotted lines typical of dynamite survey lines. I can't be completely certain that they belong to my crew, as I have found that Shell was planning to do some more exploration in this area in 2005. They do look remarkably fresh for almost 30 years, so there is a good chance I'm wrong. But it was certainly the same area, and I bet whoever did the work hated the place as much as we did.


The sabkha is an awful place to work, as vehicular access is impossible - everything was done on foot, using small portable drilling rigs (called flushing rigs, as they just relied on water pressure to drill the hole, not a rotary drill bit). The recording equipment was also manhandled through the disgusting mud. The area didn't really flood with the tide, but became very soggy, bottomless and dangerous.

Shell, the company doing the survey, wanted to try out a small inflatable hovercraft to see if it would help at all (it didn't). This was a Pindair Skima 4 - the picture below is not ours, but a previous disastrous attempt by my crew before I took it over. It burned to a crisp when the exhaust caught on the rubber inflatable part of it. Ours died when the propeller shattered at full speed, causing a rather rapid emergency stop and a couple of airborne surveyors.  It was great fun while it lasted.


Anyway, back to the seismic lines. We were using small charges of dynamite in the holes we drilled, which is what caused the marks you can see in the pictures. I can't remember the details of the charges or other stuff, but we continued the lines onto dry land - below is a pic of one of the shots going off - the sabkha is the dark area in the distance. 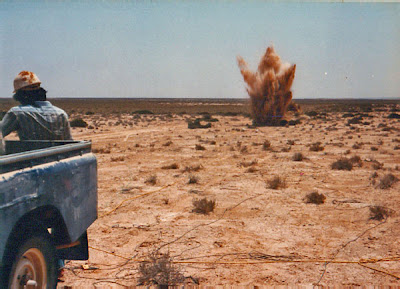 The area to the south of the sabkha, where we had our camp, is a huge WWII minefield, laid by both the Allies and the Germans - the main (and only) Tripoli to Benghazi road runs to the north of the sabkha, so the mines were to stop armies taking a sneaky shortcut to the south. (I bet there's a lot more ordnance there now after the recent troubles, undoing decades of hard work clearing the damn place). We had specialist mine-clearance crews to clear the nastiness, but there were regular reports of camels, goats and/or local Bedouin vehicles being blown up. Below is a picture of the boss of the mine-clearance company (Crushlands) burying some mines that were going to be disposed of (that is, blown up). Note the high-tech safety gear.