How to connect E.On's Energy Fit monitor to the web

For a couple of months now I've had a widget at the bottom of this blog's sidebar that displays the current electricity usage and temperature in my house. If you've been wondering how that works, the secret lies in the free energy monitor that E.On is offering its customers as part of its Energy Fit campaign. I got one of these late last year, but it was faulty and had to be replaced early in the new year. 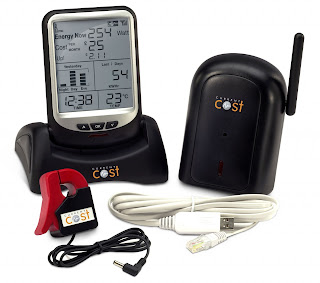 The meter that E.On supplies is actually a CurrentCost EnviR model worth about £50, and it handily comes with a USB PC connector to interface with E.On's monitoring software. This is awful, but to create the widget you don't need it - all you need is to create a free account at Pachube. This a very interesting web service that lets you create XML feeds to share data from almost any environmental sensor. There's also a collection of widgets and apps built by users for displaying this data in web pages. First you have to create a feed by getting a master API key - Pachube walks you through this procedure, which is fairly simple. All Pachube's free feeds are public - for example, mine is http://api.pachube.com/v2/feeds/12547.xml (this shows the current values and feed coordinates). 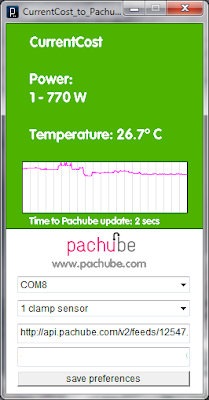 To get the data from the meter to Pachube, I use the free CurrentCost to Pachube app. This queries the meter every minute over the USB interface, then uploads the data to the Pachube feed. Then to display the data on my blog, I use the PachuDial widget. This takes the feed details you supply and then generates the necessary HTML code to put in one of Blogger's sidebar gadgets. The graphs below are also using live data from the Pachube feed.

It's just a bit of fun, but a fascinating little example of the 'internet of things'.

Email ThisBlogThis!Share to TwitterShare to FacebookShare to Pinterest
Labels: Energy, How to