I've been a fan of Windows Home Server (WHS) ever since it launched (I even stuck it on the cover of PCW that month..so much for '2008's must-have home network technology'), simply because it promised so much. Based on the robust Windows Server 2003, modified to make it almost idiot-proof, it looked like the ideal backup system for the home. Automatic daily backups of all networked PCs and Macs (using single-instance cluster-level storage for maximum space efficiency), drive redundancy, file sharing, media streaming, remote access...plenty to keep the nerds happy, but simple enough to shut that bloke down the pub up. 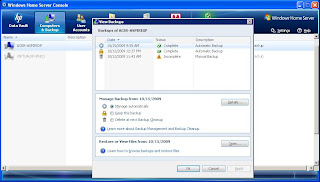 Well, that was the promise, and in the main it's all true. As retail models were thin on the ground and looked more like toys than serious backup servers, last year I built my own. It's been a lifesaver on several occasions, despite the annoying lack of support for my network cards on the restore CD. I've also reviewed a couple of HP's latest WHS systems for ZDNet,  Computeractive and V3 (actually it's the same product with two different badges), and it was interesting to compare them to my homebrew monster. They add much more media functionality, with TwonkyMedia and iTunes servers plus an automatic MP4 transcoding service for videos.

But for all its goodness, WHS hasn't captured the public's imagination. At launch it was way too expensive for what it was, and there were technical problems with the first release that almost killed it stone-dead. With the latest Power Pack 3 those problems are long gone, and it now has full Windows 7 integration to brag about.

But in the meantime, NAS boxes have caught up with many of the once-innovative features of WHS, and have alway been noticeably cheaper. The latest WHS systems are coming in at around £400-500 for 1TB, 4-bay models, which is much more competitive. But marketing has been almost non-existent, and in the UK there are only a handful of multi-bay models available (I don't count single-bay WHS machines as 'real' because you get no drive redundancy). Making your own is one solution, but I wouldn't recommend it for the casual Sunday driver. 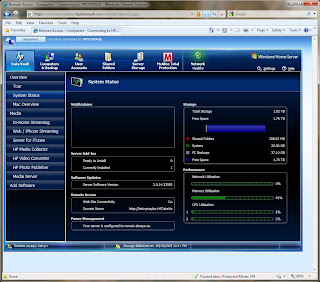 At the launch, a Microsoft executive told me they were going for a 'soft launch', aiming it at enthusiasts first before going mainstream. Well, it was indeed soft, with the result that very few people have even heard of it over two years later. Maybe now most of the nasty bugs have been worked out we'll start seeing more of it, but I'm certainly not holding my breath. It's a real shame to see such a good product so neglected.