Refreshed and redesigned, priced from £330

Acer today announced a new version of its Aspire easyStore H340 Windows Home Server network storage device. The new H340 has a redesigned case, comes in three configurations costing from £330-430 and is powered by an Intel Atom 230 CPU and 2GB of RAM. Acer is claiming that the data drives are hot-swappable, but I don't see how true hot-swap can be implemented in WHS as Drive Extender doesn't support it - drives need to be ejected first via the WHS Console. Perhaps they just mean you don't need to power off the system - hopefully I'll soon be able to get my hands on one to find out. 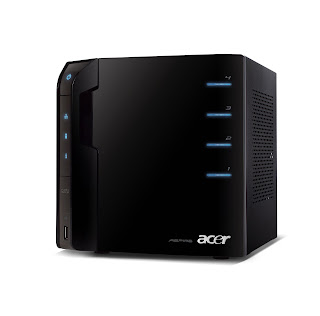 It's good to see that WHS isn't being totally abandoned, although there's still a dearth of systems available. I use it myself - I built my own DIY monster last year and it's done sterling service. My biggest gripe with WHS is the restore procedure: if the generic restore CD supports your PC's network card, you're fine. If not, you have to fiddle around putting drivers onto a USB memory key - I've never had any success with the supplemental drivers that WHS automatically extracts from the PC's OS for each backup set.

I assume the flurry of activity around WHS recently is due to the release of the Power Pack 3 service pack, which fixes lots of problems, adds full integration with Windows 7 libraries, and gives you a neat archiving and transcoding service for Windows Media Center. You can read my first impressions of Power Pack 3 on ZDNet.