My review of these new high-speed powerline adapters from East Yorkshire-based Solwise has just been published on The Inquirer. They are powered by a Gigle Networks GGL541 chip, the same one used in Belkin's Powerline HD product. I've also done a news summary comparing these with Netgear's new 500Mbps Powerline AV 500 models for ZDnet UK.

UPDATE 18/9/2010: Solwise has informed me that a problem was discovered with the power supplies in the original batch of these adapters, causing them to reboot spontaneously under noisy mains conditions. Solwise has rectified the fault and free replacements have been shipped to all existing customers. I'll be looking at a pair of the new ones over the next couple of weeks to see if there's any change in performance.
UPDATE 16/2/11: I finally got round to testing the updated version of this adapter, and the results were very interesting, leading me to believe that perhaps there was more to the problem in the firmware than just random rebooting.
Recreating as far as possible the conditions in the original test, I installed a pair of the adapters on a single 4-way extension lead with no other devices plugged in. Using Passmark's Advanced Network test, the average transfer rate between the two shot up to a staggering 130Mbps/sec (in my original tests, they managed just 94Mbps). As you can see from the graph below, this average was reduced by the early negotiation phase, and after this they were sustaining around 136Mbps. Even when putting the adapters on two widely separated extension leads containing lots of other devices, the rate only dropped to around 95-100Mbps.
A very positive result for Solwise, and it makes these adapters the fastest I've seen. And at just £86 for a pair, they're pretty good value too. At the moment, I'm testing the Netgear XAV5001 500Mbps devices, and I'll post a link to my reviews when they're done. But I can say that they do work with the Solwise adapters. 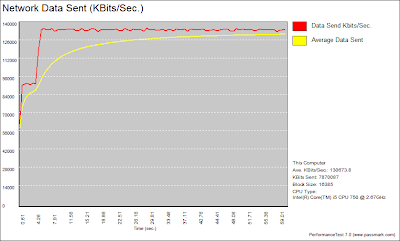