Yesterday I went along to the press launch of the new 10.1in Asus Eee Pad Transformer, which runs Android 3.0 ('Honeycomb'). My first impressions after a brief hands-on session were that it's an impressive little device (it weighs 680g) that feels very robust and well-made. The novel clip-on keyboard is excellent, although the attachment/release mechanism is a bit fiddly. 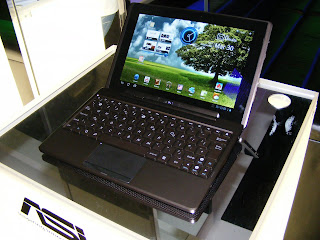 Having tried and hated an Android 1.6-based tablet (the Viewsonic Viewpad 10, which also runs Windows 7), Honeycomb is a revelation. It looks good and is easy to use, with a much-improved on-screen keyboard. But the best thing about the Eee Pad Transformer is the price: at launch, there is a 16GB Wi-Fi version costing £379, or £429 bundled with keyboard. There's also a 32-GB Wi-Fi model costing £429. 3G models will apparently come later. So it sits very squarely in iPad territory, although personally I think the iPad's aspect ratio is much better for general use (and certainly for ebooks or magazines) than a widescreen format.

Asus quotes 9.5 hours battery life, which can be extended to 16 hours using the battery in the keyboard dock. It also has two cameras, proper USB ports and an SD Card slot. It goes on sale on 6th April.

Here are brief specs taken from the press release: 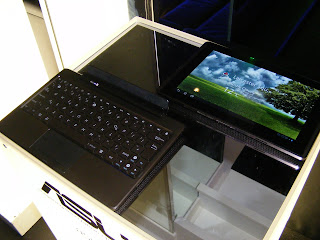