The British Library has just launched an iPhone/iPad app called Treasures, which highlights some of the (many) star attractions in its vast collection. It features selected high-resolution pictures, a brief bit of background text, and sometimes a video or audio recording for each item. 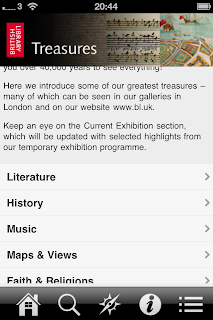 The categories are Literature, History, Music, Maps & Views, Faith & Religions, Illuminated Manuscripts and Science. Additionally, there's a Current Exhibitions section that currently shows a selection of exhibits from the Evolving English exhibition.
It's a well-crafted app with some fascinating exhibits, although you only get at most a handful of pictures, and some just have a single photo. The descriptive text is also limited to just one page per exhibit. There's the obligatory Twitter integration, but there doesn't seem to be much point to this.
Videos are short but well produced, and are a mixture of talking heads and voice-over material. There's also the occasional audio recording - my favourite is a Yorkshire dialect speaker recorded in 1955 who sounds like my grandmother.
One gripe is the lack of any links to further online information about each exhibit, and as such it's more of a virtual  tour guide than a serious learning resource. There are also location maps for BL sites and a floor plan of the Sir John Ritblat Gallery at St. Pancras.
An iPad version with high-definition content costs £2.39, and the iPhone app costs £1.19. Despite the limited depth of coverage, it's still a fascinating app. 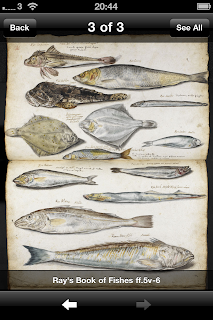 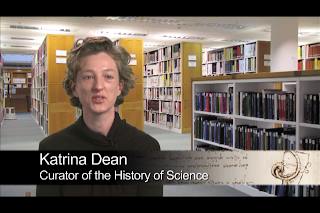 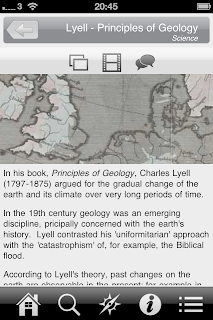