How to upgrade an Aspire One to 450Mbps Wifi

I've owned an Acer Aspire One (model AOA150) netbook since mid-2009, and it's become an indispensable tool around my office for general surfing and, more commonly, testing wireless networking kit. As the integrated Wifi is only 54Mbps 802.11g, I have a couple of 802.11n USB dongles for this - a Fritz! WLAN dual-radio/dual-stream (300Mbps)

But with triple-stream 450Mbps routers starting to trickle onto the market (I hope to review the TP-Link TL-WR2843ND when it appears in a couple of months) , I wanted to get ready to test these, so I started looking around for suitable 450Mbps USB dongles. I quickly found that these don't seem to exist yet, but I did make a very interesting discovery.

While writing the news piece about the TP-Link router for ZDNet UK, I was trying to find examples of 450Mbps-capable notebooks. To my surprise, I came across several, all using the Intel Ultimate N WiFi Link 5300 internal adapter. It turns out that this adapter has been on the market for a couple of years, and is one of the only ones to use a full three-stream (3T3R) MIMO implementation, making it capable of 450Mbps connections with a suitable router. It's also a dual-radio (2.4/5GHz) model, and what's even better is that it's available as a full-height mini-PCI Express card, which is the adapter format used in the Aspire One.


But I wasn't sure whether it was practical to upgrade the Aspire One, until I came across a great article on the Aspire One User Forum. This confirmed to me that it was worth a try, so off I went to find an adapter. In the end, I found one from the same source as the person in the how-to article - Ebay seller Justopeshop. It was £29.99 with free delivery, and also included a free third antenna.

I found the above article very accurate and easy to follow, although the third antenna wasn't as easy to fit since it was much wider (in fact, identical to the originals in the Acer). So I had to remove the entire LCD panel (four screws plus two small cables for the webcam and microphone) in order to cut a small piece out of the aluminium foil shielding behind it. This allowed the antenna's PCB to slip halfway under the panel (as the originals do) and sit neatly in the panel surround. There was no need for superglue as the antenna had double-sided tape on it. It's not ideally located, of course, as MIMO antennas are supposed to be spaced about 12cm apart, but there's not much I can do about that.

The whole job took a couple of hours, and it all went back together without a hitch, although it is a very fiddly process. Turning it back on confirmed I'd done everything right, and Windows 7 discovered the driver immediately from Windows Update. One bonus is that this adapter supports Intel's My WiFi virtual router technology, allowing the notebook to be used as a Wifi hotspot. But I didn't like the software much so I got rid of it and used Connectify instead.

Connecting to my Fritz!Box router gave me a 300Mbps link speed (obviously I can't test the 450Mbps capability until I get a suitable router), and a quick run of LAN Test showed throughput of around 60-70Mbps - a vast improvement over the 20Mbps from the original Atheros adapter. I'm very happy with the results, and for just £30 it's an absolute bargain. 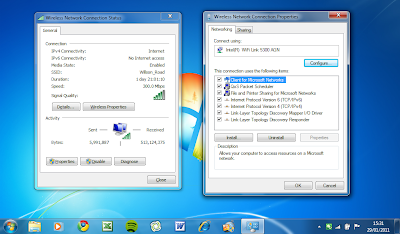 Email ThisBlogThis!Share to TwitterShare to FacebookShare to Pinterest
Labels: Hardware, How to, Networks