It's amazing how prices of networking kit have plummeted over the past decade. I have an old Linksys BEFSR41 4-port router that I bought in around 2002-3 for £75 or so. It was actually launched in 1999, costing about £150 as far as I can discover. Perhaps the most amazing thing is that it's still a current product, (now up to version 4.3) and costs about £30-40.

So imagine my surprise when I discovered a router that appears to do everything that the Linksys does, but for less than £9. It's a Dabs Best Value model, and costs £8.81 plus delivery. Absolutely bonkers - worth buying just for an emergency standby if nothing else. There's even an ADSL version for just £10.99 from Play.com.


And if four ports isn't enough, on my bargain-hunting travels I also discovered this GetNet 5-port switch for just £5.99 with free delivery from Play.com.

Of course, none of these products are wireless, so I went on the hunt for a Windows 7-compatible 802.11n Wifi dongle. The best I could come up with was this Tenda W311U for just £8.49 plus shipping from Ebuyer. I actually bought one as I needed a Windows 7 model to use with Connectify as part of a feature I was writing. It works perfectly with no drivers needed for Windows 7 and has the bonus of being absolutely tiny. It is only 'basic' 11n, which means it doesn't use 40MHz channels and hence has a link speed of 150Mbps rather than 300Mbps, but it's still faster than 802.11g. 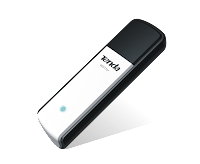 So for under £20, you can get pretty well everything you need to run a small home wireless network. Remarkable. Of course, how reliable all these pocket-money packet-shifters are is a topic for another day.