I suppose not many people can point to something on Google Maps and say 'I made that!'. But I've found a couple of rather prominent examples from my past life in seismic exploration, one in Libya and the other in Yemen.

The first is from my time with SSL in Libya in 1982. It was my first posting as Party Chief, running a seismic crew (Party 140, working for Shell) in a huge, remote and completely inhospitable area of basalt slap-bang in the centre of the country known as the Harugh-al-Aswad ('black mountains', I think).

What you can see if you move around the map a bit are parallelogram-shaped arrays of 18 blobs, arranged along intersecting lines. The blobs are holes each made by a couple of kilos of dynamite exploded on the surface of the basalt. Each array was detonated simultaneously and sequentially along the line, with arrays of geophones (a special kind of microphone) planted in the ground along the same line. It made a hell of a racket and, as you can see, a hell of a mess. The lines stretch for miles and miles in a loose grid pattern - it was a technique known as swath shooting, if I recall correctly.

The terrain was truly foul. In these pictures it looks far too pleasant - you can't see the ever-present fine dust or feel the back-shattering lurches as you drive over the boulder fields. 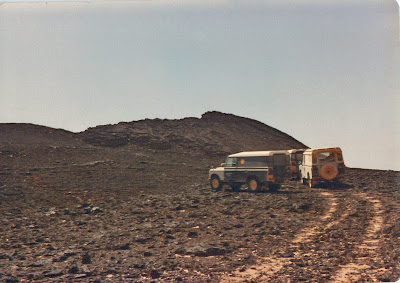 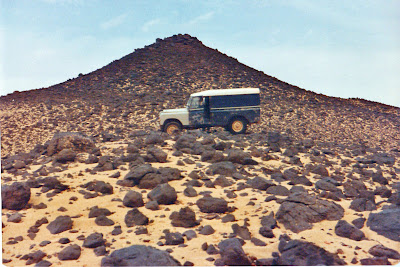 The second example I found was from my time as a consultant in Yemen in the early 1990s. As Yemen is riddled with seismic lines, it was quite hard to spot until I remembered that the company I was working for (Crescent Petroleum was the client, Western Geophysical the contractor) used a unique method of bulldozing triple lines across the desert. These stand out like a sore thumb when you spot them.

Sadly there's no alternative - if you don't clear the rocks (and don't be deceived, this terrain isn't much better than the Libyan basalt, according to my back) the vibrators can't safely lower the plate that transmits the vibrations into the ground. You need a good coupling with the ground to transmit the energy. 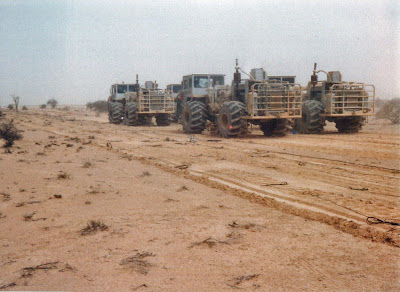 Here's another photo of the vibrators in action, clearly showing the triple lines: 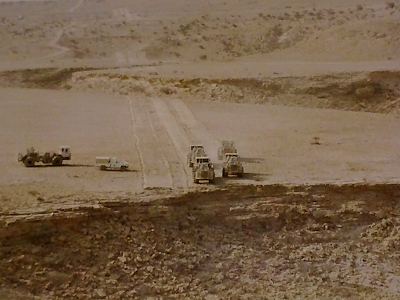 So that's my contribution to future archaeologists -  it's probably not something to be proud of, but if nothing else I can honestly say that I've left my mark on the world.