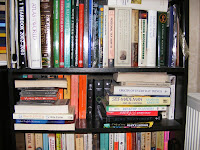 I love books. Not only do I have bookcases overflowing with them, over my years as a tech writer I've read them in pretty well every digital format you can think of. Yet I'm in no rush to get rid of my 'real' books, even though I also own an e-book reader (a Cool-er, if you're interested) that could, in theory, replace much of my library.

Notice that 'much' in the last sentence? That's the point. I'm not a great reader of novels, as you can gather from the photo of one of my tidier bookcases (I think Tolkien is just about visible on the middle shelf - naturally - but that's about it). Most of my books contains illustrations of one sort or another, and on the current generation of E-Ink-based readers, illustrations are for the most part hopeless. It's not just that they're monochrome, although that doesn't help, but they can take an age to display on these battery-sipping feebly-powered devices.

A beautiful book like Donald Johanson's From Lucy to Language (blimey, my £18.99 purchase looks cheap now..) is, at present, totally impractical for a portable reader. But the PC version of Adode's Digital Editions proves that it's not the format, but the hardware that's the bottleneck - you get full colour and interactivity (try Jinx the Black Cat Activity Book from the Adobe Sample Ebook library for a fun example), all made possible by the processing and graphics power of the PC.

Yes, E-Ink is gorgeous for text - you really do have to experience it in full sunlight (not an option for many UK readers, I know) to appreciate how it can almost match the contrast of paper - sort of shown in the photo below on a rare sunny day last year. The downside is the same as a paper book, of course - you can't read it in the dark without a light. 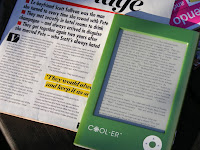 If Apple wants to use its soon-to-be announced iBook Mk II (or whatever it ends up being called) to bring a desktop PC reading experience to a handheld format, good luck to them.

As for the e-book as a publishing format, what's the future? The technology for creating beautiful facsimiles of print publications is old hat, as is that for creating things that aren't possible in print. The problem is the partly the hardware as I've mentioned above, and also the high cost of e-books (publishers need to have their heads seriously banged together on that). But Amazon's Kindle has shown that, as Apple did with iTunes, it's really the delivery model that's just as important to get right. And Apple being Apple, I'm sure they'll (re-)invent something special just for the occasion.